This small and endearing mammal is continuing to fight for its survival as a species while its habitat is threatened by development, climate change and introduced flora and fauna.

In June 2009, the Mt Buller and Mt Stirling Alpine Resort Management Board won a United Nations World Environment Day Award for its dedication to restoring the habitat of the endangered Mountain Pygmy-possum.

A number of animals live within the alpine environment here at Mt Buller. Occasionally these animal venture insde lodges for warmth and in search of food. The most common animals that are found inside lodges are Dusky Antechinus (Antechinus swainsonii) and Bush Rats (Rattus fuscipes). Both are native to the area and are extremely common animals in the sub-alpine areas of Mt Buller and Mt Stirling. These animals can become a nuisance in winter when they move inside seeking warmth and food. Mountain Pygmy-possums (Burramys parvus) have also been found in lodges in the past, but due to their rarity and the fact that they hibernate in winter, it is unlikely that you will find them living in your lodge. It is against the law to kill native animals. Live trapping is preferred and various kinds of live traps are available through common hardware stores. By law, animals cannot be relocated any further than 30m away from their point of capture. This is to ensure they are not released into the territory of another animal where they may be in danger. Unfortunately, this means that it is likely the animal will return to your building. It is your responsibility to block up any holes or access points and ensure that food is not readily accessible to discourage animals from entering your lodge.

Mt Buller Mt Stirling Resort Management has installed several nest boxes in trees for native Ringtail Possums (Pseudocheirus peregrinus) that are found in the Village. Normally such animals nest in the hollows of large old trees, but in urban areas where many of the larger trees have been removed they move into houses and buildings, where they can cause problems with residents. By providing more suitable outdoor nesting locations in the nest boxes this problem will hopefully be prevented.

If you are having problems with animals inside your lodge call the Mt Buller Mt Stirling Resort Management offices on 03 5777 6077.

Click here to learn more about small native mammals in the environment. Click here to learn more about Alpine Snakes in the environment. 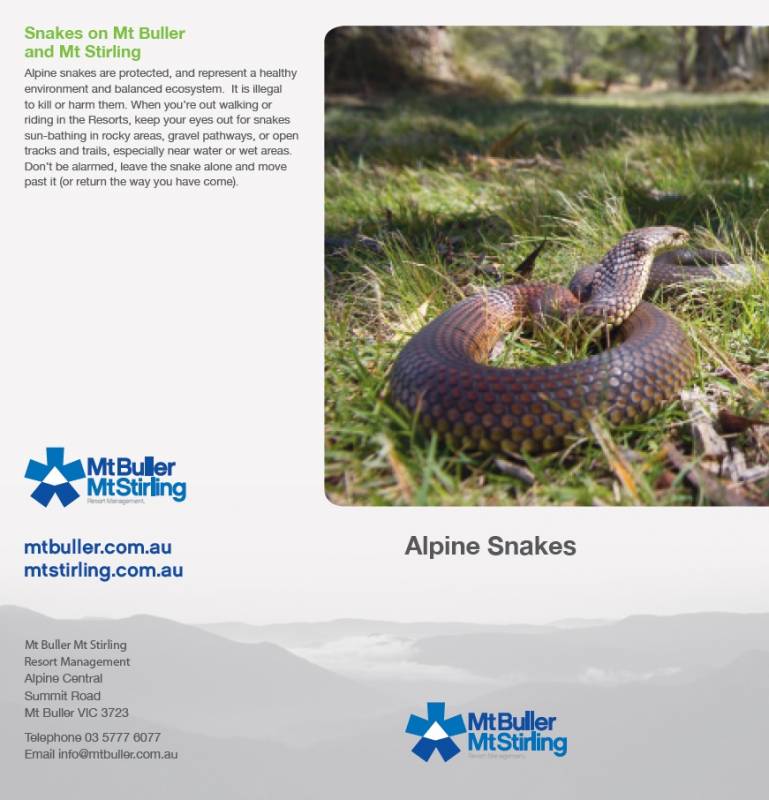 Approximately 196 species of indigenous vascular plants have been recorded above 1200m at Mt Buller. These species are found in characteristic vegetation communities called ecological vegetation classes (EVCs). Ecological vegetation classes are a convenient classification method for describing a collection of floristic communities occurring across a biogeographic range which, although differing in species present, has similar habitat and ecological processes operating

Treeless Sub-alpine Mosaic occupies most of the highest areas of the Resort above approximately 1650m, mostly on the tops of Baldy, Mt Buller and Mt Stirling. This vegetation type occurs above the tree line where the extreme climate prevents trees from growing. It is a mosaic of a number of distinct plant communities including heathlands, herbfields, grasslands and mosslands. On moderately sloping areas around the summits short dense heathland is dominated by Alpine Hovea (Hovea montana) and Snow Grasses (Poa sp.). On exposed rocky ridges Alpine Grevillea (Grevillea australis) dominates low shrubland. Another heath, Mountain Plum-pine (Podocarpus lawrencei) forms dense thickets in the headwaters of creeks on steep rock scree or boulder fields.

On permanently wet drainage lines with a shallow slope, low closed heathlands gradually give way to mossbeds. Although uncommon across the Resort, several mossbeds do occur on the northern slopes in the headwaters of Boggy Creek at Mt Buller, and along Baldy Creek at Mt Stirling. Mosslands are dominated by Sphagnum Moss (Sphagnum christatum) and the Tall Sedge (Carex appressa) and are very sensitive to disturbance.

Sub-alpine Woodland occupies the high ridges and upper slopes at elevations from about 1400m to 1700m. It is reasonably common in the higher mountainous regions of the Resort. The overstorey consists mostly of Snow Gums (Eucalyptus pauciflora) although in the lower reaches of the altitudinal range Alpine Ash or Woollybutt (Eucalyptus delegatensis) and Mountain Gum (Eucalyptus dalrympleana) may have a minor presence. The understorey varies from a dense shrub layer to a layer dominated by a wide range of grasses and forbs with scattered shrubs. Common understorey shrubs are Leafy Bossiaea (Bossiaea foliosa), Dusky Daisy-bush (Olearia phlogopappa), Alpine Shaggy-pea (Podolobium alpestre) and Alpine Pepper (Tasmannia xerophila).

The Mt Buller area is botanically significant because it is the type locality for at least nine species. Type locality is the locality from which the original named specimens of these species were collected.

The introduction of exotic plants has had a drastic impact on native ecological communities since Europeans first colonised Australia. Mt Buller has not escaped the effect of these tenacious plant invaders and many exotic species or weeds can be seen throughout the area. Many of these are exotic pasture grasses that were introduced in the past to help stabilise modified ski slopes. The following table includes some of the more prominent introduced species that have been recorded in the Resort area. This list is not exhaustive. There are other introduced species present on the mountain, especially ornamental species that occur within the Mt Buller Village.

MORE IN OUR UNIQUE ENVIRONMENT

BIKE BULLER
SEE US IN WINTER