A diverse collection of sculptural pieces are dotted throughout the Mt Buller Village, and are on display year-round, providing an opportunity to view these sculptures in vastly different alpine conditions depending on the seasons.

Over the years Mt Buller has acquired numerous sculptures including pieces owned by the Grollo Family, donations from benefactors, acquisitions through the former Mt Buller Easter Art Show, the Mt Buller Sculpture Award 2013 and the Buller Arts Association. This Association is committed to fostering the Arts on Mt Buller and welcomes input from the community. 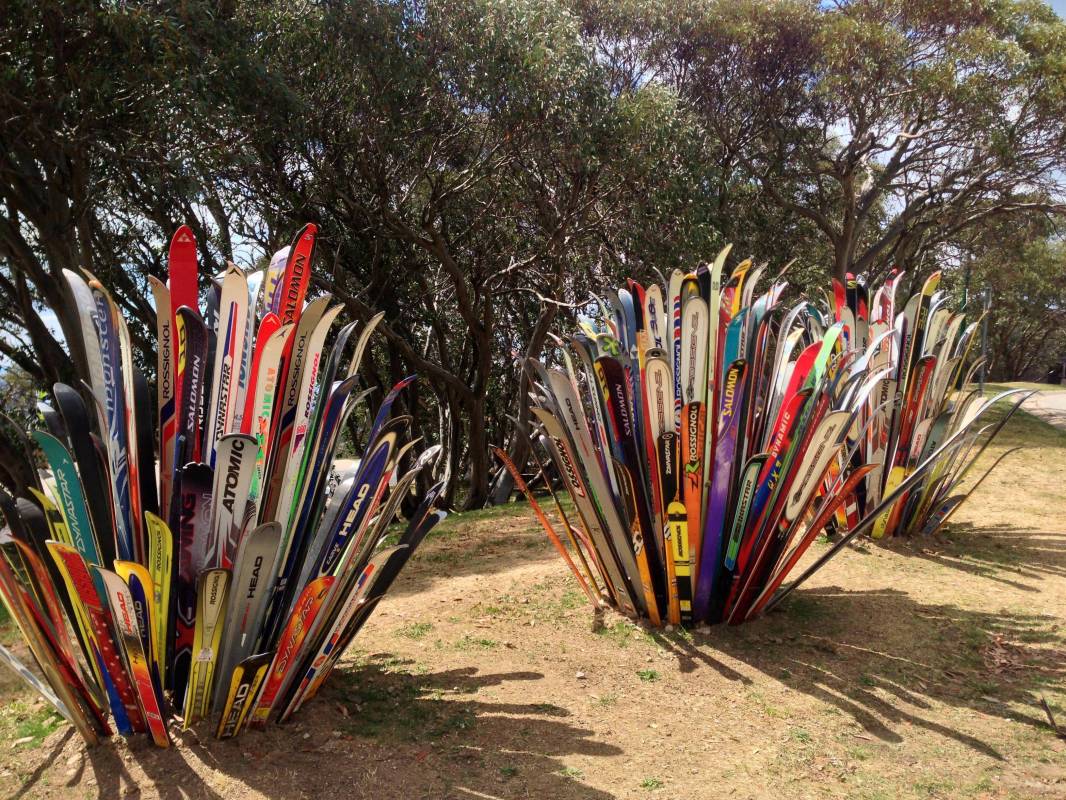 The sculpture references Mt Buller Flora in particular sedges and the Yam Daisy, with their radial formation. The artists practice encompasses sculpture and installation which evoke a sense of play and comment on society’s waste. She has been a finalist in many well know Australian sculpture shows and has participated in group and solo exhibitions in Australia and overseas.”

Look up at the wall of Village Square Plaza and you will see the next sculpture, ‘Optimism’

Benjamin Gilbert is a contemporary sculptor and designer heading the Agency of Sculpture organisation based in Yackandandah, Victoria. When Benjamin was working at the Ice Hotel in Sweden, he became aware that snow crystals begin forming on particles of atmospheric dust. This poetic concept lead to the creation of a number of works, one of which is Optimism.

Stainless steel is shaped using high pressure water to create this piece. The material responds naturally to the water pressure, creating unexpected forms which were later assembled into this snowflake sculpture.

Optimism has been kindly donated to the Mt Buller community by Michael David and family.

The next sculpture well visit is called ‘Children Playing, Mother & Child’ and is found outside the Alpine Chapel up on Chamois Close 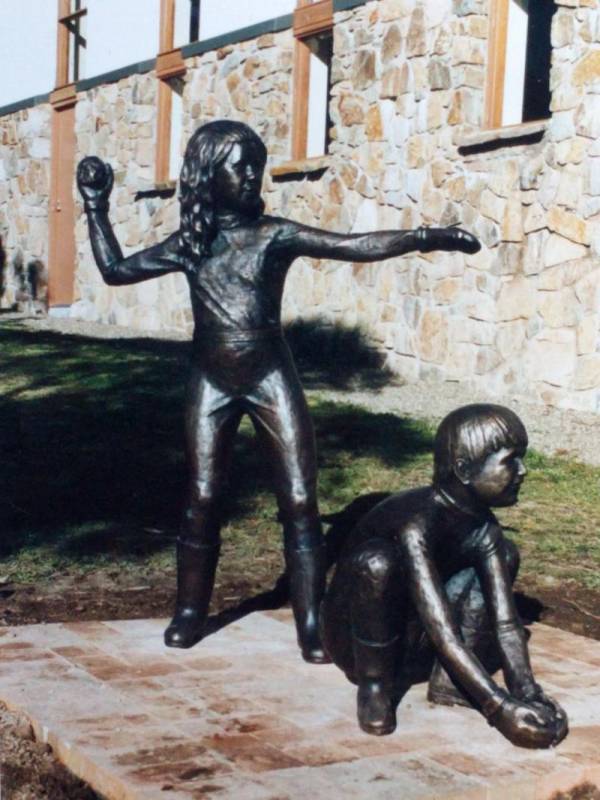 Outside the Alpine Chapel is a collection of charming bronze sculptures of a mother and her child playing in the snow. They were commissioned by the Grollo family, with the statues of the children sculpted to the likeness of the Grollo children from a family photograph.

Children Playing, Mother & Child was created by Michael Meszaros, a world renowned sculptor who has produced a range of medallions, reliefs, trophies, portraits and other major public works over his thirty year career.

He is also the creative talent behind some of Mt Buller’s other most notable statues including Spirit of the Skier and Mountain Cattleman.

From here, head towards the Mt Buller Village Square via the raised walkway that crosses the road. 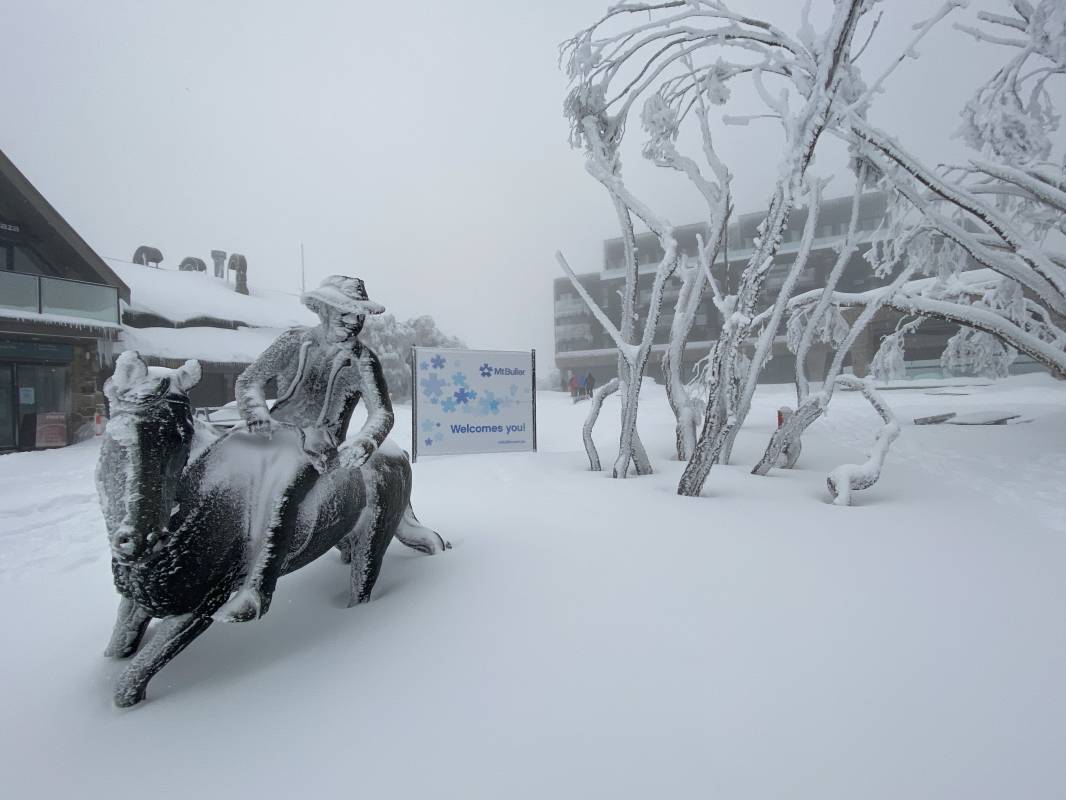 The Mountain Cattleman is a bronze statue that was commissioned by Rino Grollo in 1996. This work is a tribute to the cattlemen and their families who pioneered the High Country. 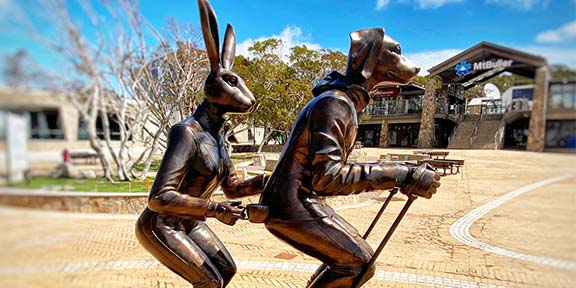 by Gillie and Marc

‘The Snow Lovers’ shows Gillie and Marc’s iconic characters, Rabbitwoman and Dogman, in a winter wonderland.

Since they met while travelling, adventure and exploring have been a huge inspiration in their work. The artists love exploring in the snow, taking them back to the fun times they had in the snow while living in New York, or to the many adventures Marc had on the slopes in Melbourne, Australia.

On one pair of skies, Rabbitwoman and Dogman zip away, leaping off a massive snow mound. Being on the same pair of skies is perfect for them; Dogman gets his thrill for the slopes while Rabbitwoman can cuddle close to his back to shield herself from the freezing slipstream.

This amazing sculpture has been installed in major cities across the world to show love and acceptance and is part of the ‘Travel Everywhere With Love’ project.

We receive the environmental consequences created by our predecessors. In turn we leave consequences for our descendants. What we create in the present will be reflected in the future.”

“The design of the upright structures and constellation of mirrors with their mutual reflections means that from certain angles, the interactive structures almost appear to be floating or invisible.

Lady and Man was created with the intention of drawing attention to another sculpture positioned inside the foyer of the Telstra building in the Melbourne business district. Michael Meszaros took the idea of using these figures to get people curious to few the interior piece, by having the two life size figures standing outside on the footpath, peering in through the glass. This piece encouraged passes by to do the same. He was initially concerned it might be considered to light hearted for such a serious building, but it was enthusiastically accepted, possibly because the building managers realised that this engaging piece in fact set their façade apart from all the other commercial building around Melbourne at that time. Now these two characters enjoy a prime position to view skiers enjoy Bourke St and they’re regularly included in many guest holiday photos here at Mt Buller.

Spirit of the Mountain

Spirit of the Mountain was awarded the ‘Best In Show Sculpture’ at the 2007 Mt Buller Easter Art Prize and Exhibition. The sculpture was then acquired by Resort Management in 2007 and installed in this scenic location, perfectly complementing the mountain vistas.

Spirit of the Mountain was created by Anton Costantino as an expression of his love of nature, simple living and celebration of the wonder of life. Anton’s works are well represented in a number of private and civic collections in Australia and overseas.

Voyeur explores the act of seeing. It plays with a parallax error by distorting and resolving this quality of sight. The work stands solitarily but contented, looking out into the world.

the audience to interact with it. Standing next to Voyeur forces the parallax correction to be called into question.

The poles are manufactured, smooth and straight – they emerge out of the ground reminiscent of slalom poles.

The poles hold aloft the “Survivors” - together they are all exposed, like humankind, driven to survive. 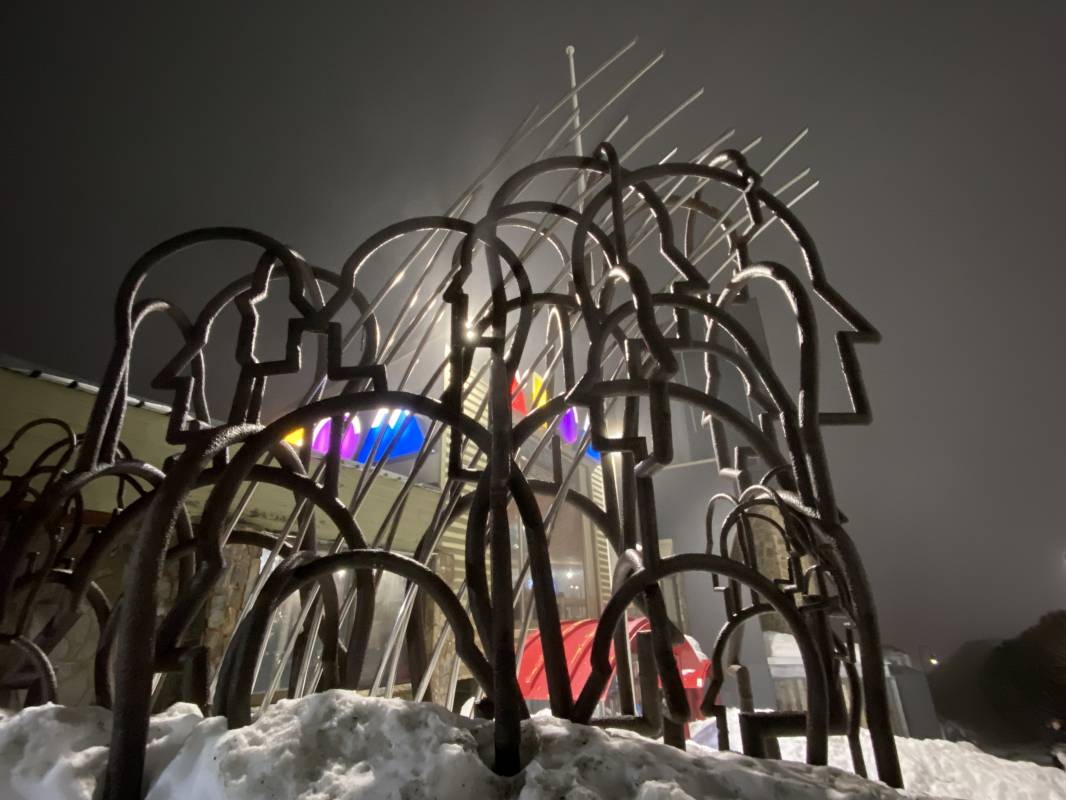 Outside The ABOM, Athlete’s Walk

This bronze artwork represents a dialogue between a mass of human forms. There are two parts to this piece and the figures converse with their counterparts in the corresponding sculpture across the path.” 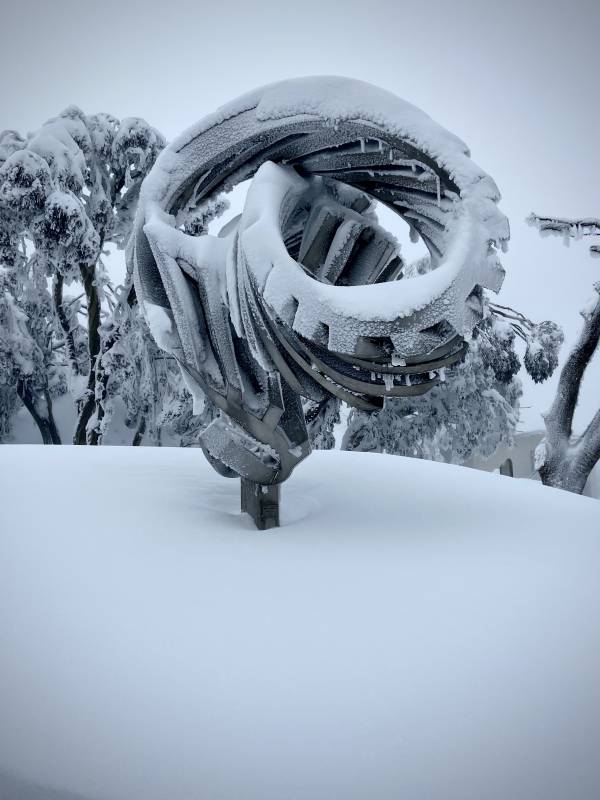 At the top of Athlete's Walk, cross over Bourke Street ski run and head left towards Ski and Snowboard School. Spirit of the Skier

The totem was Commissioned by the Buller Arts Association from local farmer and Artist Dick Forrest. It was installed  for the 2015 winter season. In this sculpture Forrest has used found objects including discarded skis and worked pieces to create this homage to the great Thunder and Snow Gods.

SEE US IN SUMMER